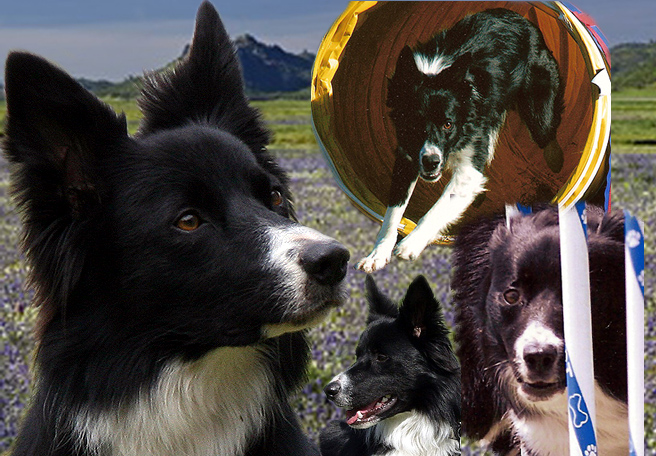 Clean coat, new leash
And I know just where I am goin to.
black suit, white tie,
I don't need a reason why.
We go runnin just as fast as we can
Coz every dog crazy bout a sharp dressed man.

MACH points, double q'ing,
I aint missin a single thing.
And contacts are stick'n,
When I run out I'm gonna do you in.
We go runnin just as fast as we can
Coz every dog crazy bout a sharp dressed man.

taken from the AKC website from the coverage of the FCI Agility World Championship in Helsinki, Finland 9/28/08 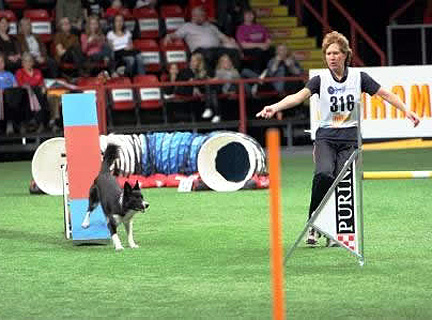 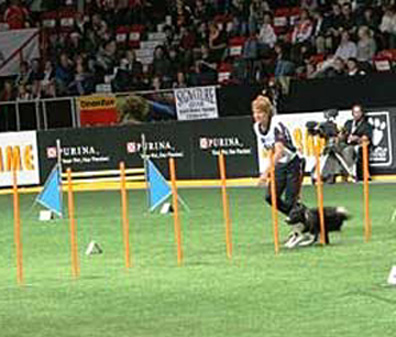 First time team Member Geri Hernandez and her Border Collie 'Focus' placed 4th overall in the Large Dog Individual.  She was .05 seconds from the overall Bronze placement  (from a class of 120  large dogs!)  Geri made the course look like something she practices at home everyday.  She was once again very calm and quiet working with Focus on the course, even on the most difficult elements.  Geri noted that she had slipped a bit going up to the teeter and she saw Focus pull up a bit on the board.  Focus has solid contacts and they really paid off today.  They started in 18th position and for many runs they were in 2nd place behind the Swiss dog that finally took 2nd place overall.  Until the Finnish Border Collie ran that started in 6th place Geri was hanging on to 2nd place.  His time bumped them up over Geri & Focus.  Then their team mates Marcus Topps and Juice took 1st place and that moved Geri and Focus into their final placement of 4th place.  A great place to finish after starting  18th  this afternoon. 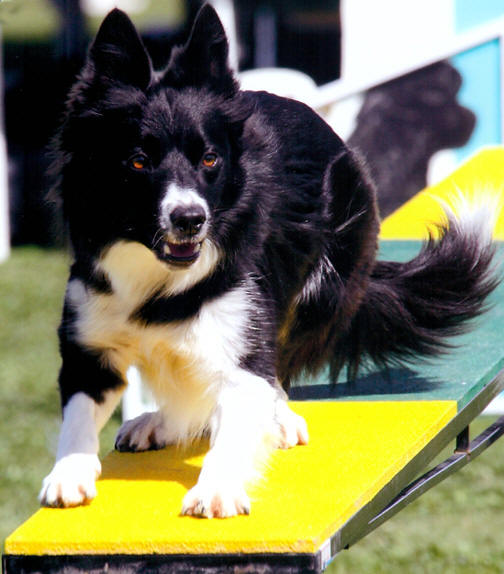 Focus sire is Scheme and his dam is Edge

When I was thinking of getting my first border collie, I did not know where to start. I remember Gail Smith saying “How about a Hob Nob?” and she introduced her dogs and me to Jan DeMello.  When the “Magnificent Seven” from Edge and Scheme came along, I was at their place weekly, interacting with all the puppies, wondering “which one is mine”?” and I was so happy that Focus was chosen to join my family!

It is hard to put into words what this boy means to me, but he has certainly exceeded my expectations and has been a joyous addition to our family.

Focus's favorite place in the house, is where ever I am. Above all else, he is my loving companion who is just as happy lying on the couch and watching TV.  He is smart, handsome, and sweet and will do anything I ask with gusto.

Always so willing to please he quickly learned agility. I feel honored every time I step into a ring with him – whether it’s practice match, training, or competing.  I never take for granted how lucky I am to be running with him. He makes me a better handler than I thought I could ever be.  But all that has taken second place to the love he has offered to me and the bond we share.

Thank you Jan for breeding and choosing the perfect dog for me!

Focus has amassed 15 double Q's towards his Mach in his first year competing along with winning several Grand Prix and Steeplechase regional qualifiers culminating in winning 2nd place at the 2007 Cynosports World Agility Championship in Scottsdale, AZ